The Long Ride, Day One

I’m sitting in a hotel room in Urk, Flevoland, typing this.  I know the town name sounds like some kind of interjection, but if it were then the place would more accurately be called Aah, or perhaps Ooh.

But I’m getting ahead of myself. 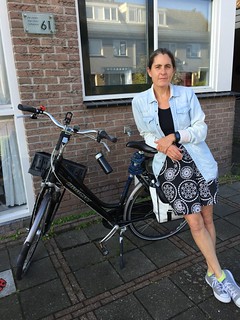 After seeing Fiona off to school (Alex was sick), I loaded my luggage onto Grace (my bike is named Grace. If you didn’t know before, well, now you do.)  I’m packed very light indeed: minimal clothing, lightweight tech, some food for the road, bike tools, towel, rain gear.  And then I did precisely what I said I’d do yesterday: rode toward work, and went straight where I’d otherwise have turned right.

That took me across the Noordhollandsch Kanaal, over the freeway, and along the narrow, cobbled Nieuwendammerdijk.  I crossed the IJ on the Zuiderzeewegbrug, which is the only bridge between Amsterdam and the IJsselmeer (everything else goes by ferry or tunnel.)  Much of the route is familiar to me from the Dam tot Dam walk that Martin and I do every year.  It was all somewhat hard going, because the wind was from the south. Mind you, that was a good thing, since that same wind would be at my back for the longer stretch through Flevoland.

But then things got easier; I turned east and rode through a series of parks and sheep fields toward the tiny town of Muiden.  Muiden is old.  It sits on the mouth of the river Vecht, and has only one single-lane bridge for all traffic that wants to cross it. I adore the place, but it’s kind of a pain.

After Muiden, I took the road that follows the coastal dike.  Like a lot of Dutch dike roads, it’s on the land side and below the top of the earthworks, so one has the sensation of riding beside a tall green slope, with no notion of the weight of the water on the other side.  To my right, the land spread out: peaceful fields and plump cattle basking in the late August sun.  I passed through Muiderberg and headed to the Hollandse Brug, the route to Flevoland. 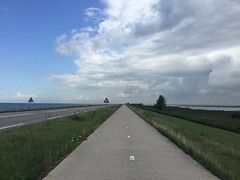 Flevoland is the new province, built by filling in some of the old Zuiderzee.  It’s beautiful, but it’s also made up of very long, straight, unchanging stretches.  One can lose one’s self in the pursuit of the vanishing point.  I did, several times.  (This is good practice for Sunday, when I will be crossing the Afsluitdijk, the ultimate long, straight, unchanging stretch of bike path).

But no one told the plants or the sheep that they were part of a homogenous landscape.  The birds didn’t get the memo either.  Looking more closely, one sees the individual variety that combines into this illusion of simplicity: the way the birds gather here rather than there, the ragged clustering of the sheep, the surprising variance in the population of grass along the path, the way the trees all look like Old Master paintings.  I suspect that in a hundred years, the landscape will start to vary, in the same way that a development of identical homes gets more character as people start moving in and changing things to suit themselves.

This was when having the wind at my back was best. I made good time along the coast and through the city of Lelystad. I had a wrong turn or two before I found the coastal road north of Lelystad, which runs between a vast line of windmills and hills that are kept trim by means of a flock of sheep.  Something inspired me to tweet about a fiddle band named Windmills and Sheep, and now it’s part of my private vocabulary. 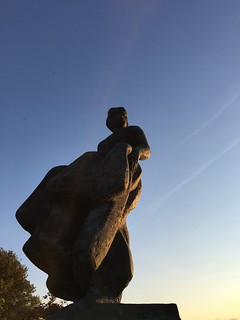 Crossing to the Nordoostpolder, the older part of Flevoland, meant cycling athwart the wind, and suddenly everything was harder.  Emblematically, the sheep were more isolated and the windmills under construction.  But ahead of me was Urk, my destination of the day.

Urk was once an island in the Zuiderzee, with a harbor and a village full of fishermen.  But when the province of Flevoland was built, land came to Urk: the reverse of the usual process, when erosion turns inland villages into seaside ones. Urk is a lovely wee place, with a large harbor and a small beach, full of restaurants that serve fish.  There’s a memorial to fishermen lost at sea, with a statue of a woman looking away from the water and a series of plaques listing every Urkerman lost to the waves from 1717 until the present.

I walked along the beach and gathered sea glass, and thought about wealth. It’s a topic that had been rattling around in my head all day, as I anxiously rationed my photographic time lest I be too slow to get to Urk, as I filled and refilled my water bottle from the liter and a half I’d brought with me, as I monitored the battery level on my phone. And I’d been thinking about it as I rode past the vast stripes of undifferentiated, inedible greenery beside the bike paths of a country that had suffered terrible famine in living memory.

This trip is the product of incredible wealth: my household has enough resources, financial and emotional, to spare an entire adult for four days.  More than that: I can stay in hotels and eat in restaurants on the way.  And the land is wealthy, with money to spare not only for grass and good bike paths, but to build an entire province out of an inland sea.

Of course, the construction of the land and investment in the infrastructure is wealth well-used: invested for the future, where it will repay that investment many times over; invested in the happiness and well-being of the people who live here. And there’s a fair argument that this trip is an investment in my happiness, my good emotional health. 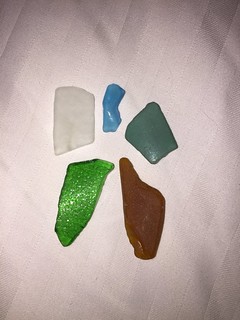 But wealth leads to greed the way that spring leads to summer. I like to think I have my own greed, my own desire for more than I need, well in hand. I ride a used bike, shop at secondhand stores, make my own clothes. But when I looked at my collection of sea glass, fifteen or more pieces, mostly green and clear, many of them undistinguished, I knew better. I have sea glass from so many beaches that I lose track. I don’t need more forgettable pieces. And yet there I was.

So I decided to pare the collection down, to only take five from the beach. Five that were special to me, because of their color or their texture. The rest would go back for someone else to find.

That was hard. I chose one of every color I had: clear, green, sky blue, turquoise, brown. But the turquoise and the sky blue were the only specimens of their color that I’d found, so even my five pieces represent a kind of poverty for later beachcombers.

I know it’s only beach glass. But confronting the acquisitive, hoarding impulse and failing to properly overcome it leaves me thoughtful as well as mindful. There’s a passage in the Papal encyclical, Laudato Si’, that speaks to this:

We need to take up an ancient lesson, found in different religious traditions and also in the Bible. It is the conviction that “less is more”. A constant flood of new consumer goods can baffle the heart and prevent us from cherishing each thing and each moment. To be serenely present to each reality, however small it may be, opens us to much greater horizons of understanding and personal fulfilment.

The Pope’s point, and it’s a good one, is that we cannot keep up with our acquisitiveness. There’s not enough stuff in the world to feed the whole planet’s hunger for the shiny. I fear that we cannot change, as a people, in time to save the world.

But I can change. Tomorrow, somewhere along the way, I’m going to leave the five pieces of sea glass behind to delight someone else. The memory of finding them will be wealth enough, properly invested.

4 Responses to The Long Ride, Day One