I’ve worried about this day’s cycling the whole trip. The forecast was rain, or thunderstorms, or maybe both, with the wind blowing into my face. I’d lucked out on the weather so much for the rest of the adventure; I kind of expected that luck to run out. And the plan was a little careful anyway: rather than circle all the way around the IJsselmeer coast and then return to my village, which would be some 100 kilometers, I’d decided to cheat a little and strike out inland at Monnikedam. I could close the loop at home for about 70 kilometers, and the total four-day distance would still contain the IJsselmeer. 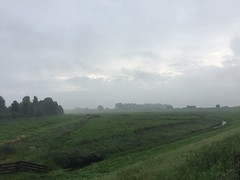 I woke to thunder and rain. I shrugged. I’m a cyclist in the Netherlands. I have a rain suit. If the thunder would just go away, I could cope. I looked at the rain radar, and it seemed that the morning storm was going to be the only rain for some time. So I lingered a little over breakfast, lingered a little more when no one could figure out how to take my money for the hotel room, and finally set out in the drizzle. The mist was rising off the land, and the atmosphere was magical.

I had always thought of the section of Noord-Holland I was going through (or rather, around) as fairly rural, and there were certainly areas that matched that, small villages with a few streets and old churches interspersed with farmland, visible from the top of the dike where I cycled. But I also biked through a number of towns that felt very suburban, more like the urbanized south of the province than the rural north. I suspect, in retrospect, that that entire corner of land is basically a suburb of Hoorn. 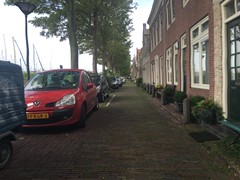 As I was passing through Enkhuizen (which has both burb-feeling outer districts and a lovely old harbor), the sun came out and the world brightened. I looked at my watch and did some math, given how early it was in the day, how I was feeling (just fine), and how the weather was. I realized that, all being well, I could actually do the entire western shore of the IJsselmeer and get home in time for dinner. I texted Martin to manage his expectations and pushed onward.

Although I haven’t cycled as far north as Hoorn, the nature of the landscape I was going through was deeply familiar to me: paths on top of or just inland of the dykes, more stinging nettles than elsewhere on my ride, the fields just so, the villages with their own particular rhythm, the roof shapes and road textures. As hard to describe as my beloved’s face, because it’s baseline, not variant. This is my IJsselmeer coastal landscape; everything else is defined in contrast to it. I simply didn’t know how far north it extended. 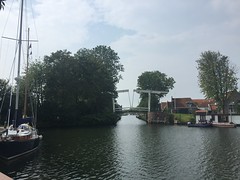 Soon enough I was in Edam, which used to be the northernmost coastal town I’d cycled to. South of it lies Volendam, which is both a delightful slice of Dutch life and a mind-watering tourist trap (depending on your mental filters). I happen to like it. South of that, the well-known landmarks rolled beneath my wheels: Monnikedam, the causeway to Marken (amateur-level, now that I’ve done the Afsluitdijk), Uitdam, Durgerdam. Somewhere around Uitdam is the place where I stood on the edge of the IJsselmeer and had the idea for this trip, a couple of years ago.

At Durgerdam I turned away from the IJsselmeer and crossed under the bridge where the circumnavigation itself started. After a few smug tweets, I cycled home, just beating the afternoon thunderstorm. Now all that remains is the laundry.

Trip stats:
My bike computer says that I did 366.22 kilometers in 20:18 hours of movement. It measures by wheel-spins, which is pretty accurate, since I took no ferries or other transport on the trip. That averages out to 18 kilometers per hour, or just over 11 miles per hour, which is normal-to-fast Dutch cycling speed.

And how do I feel?
Fine, actually.

I’ve been sleeping very well, eating rather a lot, and drinking pretty well continuously. Martin found a concentrated lemon flavor to squirt into my water bottle, which has stopped me dehydrating (I find plain water rather blah when I’m exercising, which leads to bad outcomes). I was imprudent in the matter of tank tops on the first days, and have some sunburn on my back as a result.

But I’m not saddle-sore. My muscles don’t ache more than I’d expect. And I haven’t exerted myself into long-term tiredness; if anything, I’ve gained energy and endurance as I’ve traveled.

And four days of endorphin high is kinda fun. I have more thoughts, but those that are for sharing will take some time to filter through.

This entry was posted in Things Dutch. Bookmark the permalink.