I’m writing this under a tree in the Noord-Hollands town of Onderdijk, watching the late afternoon sun and listening to the waves of the IJsselmeer break behind me. Today’s ride was shorter than the last two—63 kilometers—but it contained the stretch I was most concerned about: the Afsluitdijk.

Also, I was late getting started. Yesterday evening, I overheard someone giving directions using the Catholic church as a waypoint. I was surprised to hear there was one in Makkum; I’d looked on the web, but seen nothing nearer than Bolsward, which was too far out of my way to attend. (Let’s just say that the Dutch Catholic church isn’t very internet-savvy.) But there it was: the church of the Blessed Titus Brandsma, the Netherlands’ own Holocaust martyr. And the sign on the door said there was a service at 9:30 every Sunday. So in the morning, I went. 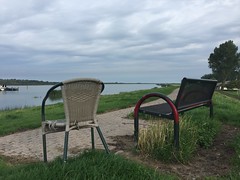 It was a communion service run by a deacon rather than a mass led by a priest. It was practically deserted; there were maybe ten people plus the fifteen-strong choir. The deacon himself turned out to also be a choir member, so the service was full of music, all sung-with rather than listened-to. Well, except for the bit at the end of the sermon when he moved smoothly from speaking to singing, and made it the most natural thing in the world.

The sermon was mostly about a city in the Philippines that he visited a few years ago, and to which he now sends all the lightly-used and unused school supplies he can lay his hands on. It was a heartfelt and effective version of the standard “here’s my cause; please give at the door” sermon. Even if it hadn’t tied in so strongly to my thoughts about wealth and its uses, I would have been touched. 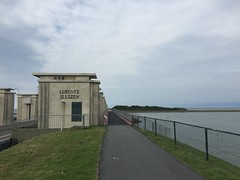 After the service, I checked out of the hotel and got on Grace. My first destination was the Afsluitdijk, the 32-kilometer earthwork that closes off the mouth of the IJsselmeer. There are great 1930’s sluizen, sluices, on either side of it, each flanked by its own small drawbridge and lock system for boats. I crossed the eastern bridge just as the booms were about to come down, cutting it fine enough that the lock-keeper wagged his finger at me in (mostly) mock censure. I’m afraid I grinned ruefully rather than being truly chastened.

Then the dike. I’d built it up in my head as some kind of great obstacle; it’s one of the reasons I chose a hotel only 60-plus kilometers from Makkum for tonight. And to be fair, had the wind been in my face, or the rain fallen, it could have been a very difficult stretch, because there is no shelter at all. Just IJsselmeer, road, bike path, dike. Today, however, the sun was playing with the wispy clouds and the wind was at my back. I started relatively slowly, stopping to take a panoramic photo from the dike top. But at the halfway point, I realized that if I pushed just a little, I could make the entire length in an hour. I would have managed it, too, had there not been a statue of Cornelis Lely to take a picture of just before the end. So I missed by a minute. 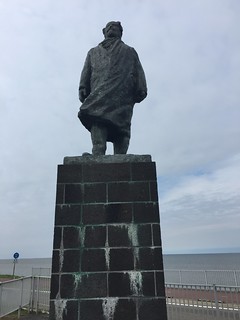 Still, 61 minutes across the Afsluitdijk on a city bike, in a skirt, for a basically non-serious cyclist, isn’t too bad. And I still had attention to spare for the variety of wildflowers that grow in the dike beside the road, for the pale yellow butterflies that darted across my path, for the flocks of starlings that settle in the grass only to fly up, startled, whenever a cyclist comes by. I still had energy to laugh with sheer joy at the immediacy and pervasiveness of nature, taking over our serious, planned works with its unthinking, directionless force. It’s not even that nature itself is joyous; there was a dead rabbit on the bike path at the end of the dike, a memento mori if ever I have seen one. But still, I was joyful. Might have been the endorphins.

I celebrated by going to the fish stand just onshore and buying a broodje haring met uien, raw herring on a roll topped with chopped onions. I’ve developed a taste for it over the last few years, which makes me unusual for a foreigner. As I was walking away from the stand, the vendors were marveling at the Engelse vrouw die haring wil eten. (I ordered in Dutch, but my accent is hard to miss.)

The ride down the coast from the Afsluitdijk was both like and unlike Flevoland. The northern chunk of Noord-Holland was reclaimed earlier than the new province, but it was created as part of the same project. You can tell when you look on the map, because it has the same long, straight roads, widely spaced, and the same blocky feel to the land. But it’s got more trees, and the buildings are older and distinctly Noord-Hollands in shape and structure. It felt to me, having lived in Noord-Holland for eight years now, surprisingly like home. 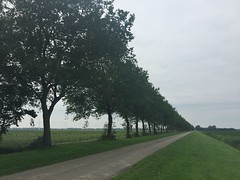 (The area was also the site of one of the more serious pieces of ecological vandalism during the war, when the retreating Germans blew the dikes and flooded the new-drained land. There are still signs and monuments about it around the area: what happened, which pumping stations moved how much water to remedy it, what was lost.)

The new bit of Noord-Holland ends at Medemblik, a charming (but possibly overly self-conscious) little town. In addition to the brick buildings, the cafés, the brick fort, and the bus museum, Medmblik is the northern end of a little steam railway. I arrived in time to watch the engineers (one of whom looked startlingly like David Tennant) fill the tank with water, stoke the coal, fire up the boiler, and at last send the little train full of tourists on their way. It was all rather adorable. 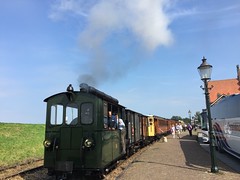 Then I went further south and found my hotel, which was not, on first impression, adorable. My room is small and in a dark corridor. It’s not frightening or anything, but it was incentive enough to go find a tree to sit under and draft this instead.

I can’t say, looking back on the day, that I had any connected thoughts about wealth (at least not after the service). Although there’s still more traveling to do on the bike trip, the fietstocht, it feels to me like the first two days were a philosophical journey in themselves. Perhaps it’s returning to Noord-Holland, though I’ve never been this far north on a bike. Perhaps it’s just that I only had two days’ worth of thoughts on the issue before I have to start using what I have so far.

I seem to be asking myself a new question, or the same questions in a new way: what wealth do I have in this situation? where in it am I poor? Today my wealth was time, and I spent it watching the train. As for poverty, I’m not sure that I have any today. I don’t know what I could want for the moment that I do not have.

And I have two random thoughts, which don’t connect to any theme. The first is that I would not have enjoyed this trip nearly so much a few years ago, because my fears about my competence in the language would have put me off. But although my Dutch is still very far from perfect (or even good), I am now confident that I can make myself understood and understand what is said to me in reply. And the people I interact with pick that up; no one has spoken more than a few scattered words of English to me on this trip.

The second thought is that I said that I was going on this trip alone. That’s not true. Not only have I brought my friends and internet acquaintances with me on Twitter and through these blog posts, but I have also fallen in with a wonderful variety of people along the way. A better way to phrase the matter might be that I have gone on this trip without choosing my companions myself, but rather leaving their choice to fate.