Tonight my bike is parked in Makkum, a lovely tourist town in Friesland.

The day started well: a beautiful sunrise painting the skies as I got up, then a Dutch breakfast of bread, cheese, meats, and egg (a double-yoker, even! My first ever.). The hotel-keeper gave me a plastic bag and told me I should pack something for the road as well, a gift that made me think of a passage from The Left Hand of Darkness:

he had set out all the ready food he could find done up in a packet as fuel for my three days’ run. That kindness saved me, and also saved my courage, for whenever on the road I ate of that fruit and bread I thought, “There’s one man thinks me no traitor; for he gave me this.”

Not that anyone is calling me a traitor. But food can be flavored by the hands that give it, and he was kind to me. 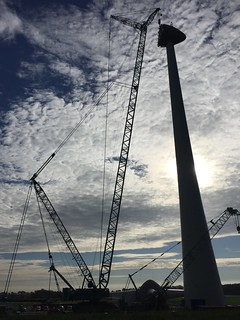 I set out on the first leg: a 20-kilometer stretch between a sheep-mown dike and the IJsselmeer, all the way up from Urk to Lemmer. It was fascinating riding, because they’re tearing down old windmills and building new ones. I took several photos for my growing collection of Sheep & Windmills album covers.

Unfortunately, it’s also about the most isolated stretch of road I’ve been on. Virtually no one was cycling that way, and there’s nothing but a closed-off service road over the dike. Which is why, precisely in the middle, ten kilometers from the whole world, my back tire went suddenly and lethally flat.

Fine, I thought breezily. I have a repair kit, and I know (in theory) how to patch an inner tube without taking the wheel off (a necessary skill: getting the back wheel off of a Dutch bike is not a roadside job). I was still feeling my way through the process when a group of three men and two women, all looking to be in their sixties, pulled up. They were on their way to Lemmer, and I happen to have pulled over right by their coffee spot.

Two of the men looked kindly at my tentative fumbles and helpfully took over (not in an egoizing “sit over there, little lady” way, but in a respectful “here, let me do the bits you don’t seem to know” fashion). We found the two holes. They shook their heads over my tire repair kit—too old; the patches were degraded—and fished out a patch from their own. I did the glue, they slapped the patch on and reassembled inner tube and tire. Inflation, right the bike, repack, and…the tire was flat again. 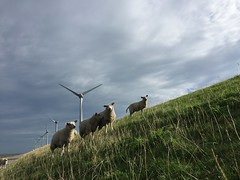 I shrugged and told them it was time for the student to demonstrate her knowledge. They nodded, a little relieved, and sipped their coffee. I flipped the bike, exposed the patch, noticed it hadn’t taken on a couple of the edges. Added more adhesive, pressed it home, re-inflated, and…flat again.

They gave me the number of a bike shop in Lemmer that could send a car along the dike road, but I decided to give it one more try first. It’s not a mystery, after all. It’s just known substances, rubber and rubber cement, fixing a mechanical problem. I shook hands with my teachers, waved the party off, and sat down to apply their lessons in the meticulous style that I can only do alone. Rub off all the rubber cement. Sand. Smear inner tube and patch with rubber cement. Wait for it to dry entirely. Press patch home, hold. Check, check, double check. Then reassemble the back tire, flip the bike, repack it. Check again before riding off.

I was sure the tire was losing air for the first few kilometers. I stopped and repumped it, thinking I could limp to Lemmer with a slow leak. But then, whether because riding improved the adhesion or because it was OK the whole time, it held. I passed my benefactors on their second coffee break, and called my thanks to them as they waved and gave me thumbs-ups. 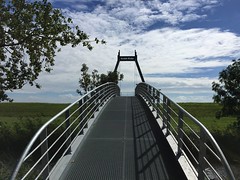 Then I stopped at the bike shop in Lemmer and bought a new repair kit.

The entire episode completely failed to sink my spirits. Some of that is endorphins, but more of it is the kindness of the people who stopped. I was reminded of the St Christopher medal zip-tied to my bike, and the story that probably created him. Without a flood, without the danger to carry the child across, there is no saint. I begin to think his value is more in dealing with travel disasters than preventing them.

I had no further chances to find out after Lemmer. That was my gateway from Flevoland the much older province of Friesland. The difference between the provinces was immediately apparent in the absence of that sameness that I mentioned yesterday. There are no long stretches of unchanging road in Friesland. Nothing aligns to a grid. There are more trees and fewer windmills; more cattle and fewer sheep. Unfortunately, there are also long stretches where nothing runs along the coast, and I had to veer inland rather than sticking to the IJsselmeer. But inland was beautiful too, with actual (low) hills, cattle, and farm fields full of swallows in murmuration. 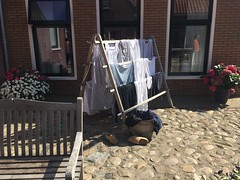 I saw oddities: a literal bridge to nowhere, designed so that the viewer can see over the dike in one particular spot. A wooden frame for photographing the landscape through like a postcard, opposite a strange openwork concrete tower. I ran into a local festival in Hindelopen, complete with women in traditional dress singing a haunting a capella piece in Frisian (also, a laundry rack hung with traditional underclothing). I outpaced a tractor for five kilometers before it came close enough to overtake me (very Rush). The day was hot and the wind sometimes against me, but I still made good time, arriving in Makkum at about 5:30. Particularly considering the lost hour in the morning, this is completely acceptable. 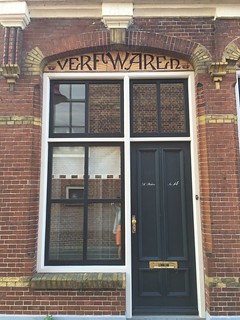 And what was I thinking about when I was riding? Wealth, of course; my mind continues to worry at it like a dog at a bone. Because it occurs to me that, despite all of my material and immaterial possessions, I don’t feel wealthy. My sufficiency is all but invisible, while a different kind of poverty grinds away at me: time- and attention-poverty. I never have enough of either to make my cognitive rent (work and family), pay my intellectual subscriptions, and have much left over for the pleasures of the mind. I make do with threadbare thoughts, the discount goods of skimmed reading, and the street-corner salvage of summaries whose details I haven’t the energy to pursue. Sometimes I salt away a few hours’ worth of original reading or a bike ride’s connected thinking as an investment for future dividends of insight. But mostly I live thought to thought, hoping no large intellectual bill will come due.

Then I got that flat tire, which (#irony!) interrupted that train of thought, probably for the best. Self-pity is not a good look on me.

Because the lesson of the flat tire, and of the gift sandwich I ate later in the day, is that people are sustainable wealth: kindly people, helpful people, inventive people. The pleasures of conversation and friendship are like the pleasures of acquisition and having, but they impoverish no one else, take up no more room in my crowded attic workspace, add no carbon to the atmosphere. They’re a context in which my children can grow up to be as wealthy as I am, if not more so. 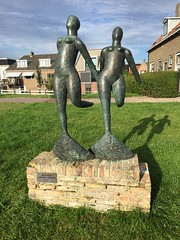 I’ve kind of known this for a long time. When I say that the Netherlands is a wealthy country, what I mean is that the educational system is good, the physical infrastructure is created for the use of people (including the famous public art), and the society itself is rich in helpfulness. Despite companies’ attempts to do an end-run around them, the labor laws and the social safety net are a material contribution to the well-being of the people who live here. And the widespread acceptance of part-time working by both parents and the community mindfulness of everyone’s children are an investment for future dividends, both emotional and financial.

(By the way, this is why when a politician asserts that they are family-friendly, I look at their economic platform. Do they support moves that will make people feel more secure, or do they advocate policies that erode their financial, and thus emotional, stability? It’s harder for stressed, anxious people to be good parents and good partners.)

All of this is also another reason that our treatment—Europe’s and America’s—of our respective populations of refugees is so wrong. The death and suffering of these people impoverishes us all. And the irony is that, trying to hold onto our material prosperity, we forget that it’s the human wealth that endures and grows. The refugees on our borders are wealth, begging to enrich us in ways that will outlast money itself.